The Church Continues to Grow

Throughout the second half of the third century Christianity grew in almost all sectors of the Roman Empire. We have records (letters and notes from regional councils) of increasing numbers of regional bishops which speak of numerical growth; there are also a few non-antagonistic references to Christians in Roman governmental letters which speak to growing Christian influence (Christians were serving in the military and in local governmental positions).

We also know very few details of the Church in the last 30 years of the third century - we have few writings of substance which seems to indicate that there were few great leaders as has been seen during other previous periods. But we do know that the Roman Empire suffered during this period.

From around 240 until the reign of Diocletian which began in 284, it looked like the empire might dissolve. There was a succession of violent imperial changes as men killed each other and plotted to take leadership from one another. Although this is not completely different with "normal" Roman turnover of emperors, this period was especially chaotic. With poor imperial leadership came other problems: with a turnover of emperors came higher taxation and a lowering of the value of coinage (the currency that fueled the economy) - in other words, inflation.

Until the fourth century Roman generals had been able to defend the borders against the constant threat of barbarian attack, but during the second half of the fourth century the barbarians had developed into a more mobile opponent. Constant raids along the borders and inflation had forced many subsistance farmers to give up the land and move to the cities in search of a more secure life. The economic distress was beginning to threaten the very existence of the empire. Added to this economic stress, a severe plague hit in the Roman empire in the middle of the fourth century: the population of young men was affected and thus there was not enough manpower to supply the Roman legends.

In the larger cities the wealthy would typically pay for pagan temples and festivals. This was done to encourage the populace to worship since it was thought that worship of the gods enabled the Roman society to prosper. During economic hard times the wealthy did not have the capital and pagan worship suffered. There was a general sense of a growing spiritual crisis. 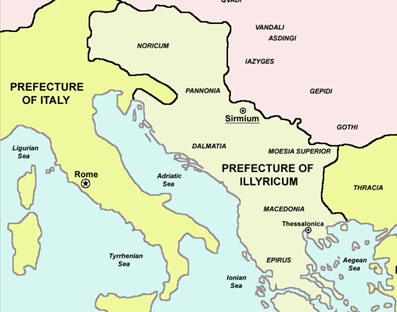 The Roman Tetrarchy
In 284 Diocletian was promoted to Augustus after defeating other emperor seeking generals. Diocletian was in a strong line of soldier-general-emperors that had grown up in the Illyricum region. Diocletian quickly moved to established a new leadership scheme: an Augustus with a Caesar serving under him. He promoted Maximian to serve with him as Caesar. In 293 after another round of internal battles for leadership, Diocletian moved to the next phase of reform: there would be an Augustus on both sides of the empire with a Caesar serving under him. Maximian was named Augustus in west with Constantius, another great Illyrian general who had supported Diocletian with troops, was promoted to serve as the western Caesar. Diocletian selected Galerius, another Illyrian general to serve as Caesar in the east. Diocletian also took Constantine into his camp, the son of his western Caesar. Diocletian wanted to be involved in the training of Constantine (already serving in military leadership).

While the Roman empire struggled, the Christian Church seems to have continued to grow. The number of bishops had multiplied (indicating numerical growth and geographical reach), church buildings had begun to be purchased or built in larger cities, and Christians were found serving in governmental positions and in the military. (Eusebius, EH 8.1)

By the late 290's the Tetrarchy had secured the borders and established peace in the empire. Diocletian was pushing for religious renewal among the populace, thus he promoted worship of the various pagan deities. The Christians and a few other mystery cults would not submit to worship of the Roman gods.

"...more troubling was the resistance of veteran Christian soldiers to the revival of pagan rituals in the camps. The conversion of pagan soldiers and the conscription of Christian believers had increased the Christian presence in the army by the end of the third century. As long as these fideles were not forced to commit idolatry, many of them seemed willing to offer service to a state that was not persecuting their brethren." (Odahl's Constantine, p.64)

This angered Diocletian - he wanted to force public worship on the Christians. We know from Lactantius that Diocletian had Christians in his service just before he began his worst persecution. These attendants made the sign of the cross while fortune tellers were trying to divine the future for the emperor, thus causing the soothsayers difficulty. Diocletian demanded that these Christians be whipped. He also sent orders to his commanders that all Christians serving in the military be made to offer sacrifices or be dismissed from service. (Lactantius - Of The Manner in Which the Persecutors Died 10.6)

You can submit a comment or ask a question using simple form.
CH101 retains the right to edit and post comments/questions unless you specifically ask that your comments NOT be posted. Personal messages are never posted...only questions about Church History, the Bible, etc.

top of page  |  go to page 3  -  Persecution under Diocletian

Biblical Issues
- what is false doctrine?
- pacifism and the NT
- who wrote NT Hebrews
- the trinity
- the apocrypha
- saul the persecutor
- NT, faith, resurrection
- NT and tithing
- Is the NT inspired?
- wine in the bible